In 1973 Calzaturificio Star takes the form of limited company: Vito Artioli is the sole manager of the company with his father as a special prosecutor. The oil crisis influences the purchasing power of Europeans and Americans and also Artioli sales are adversely affected; but in those years, a rich new market appears: the Arabic one.

The production also touches on niches such as the golf shoe and polo boot made to measure: Vito Artioli get to draw more than a thousand models per year and customers grows more and more. Next to shoes, to meet the demands, it also starts producing belts matched with the shoes, always designed by Vito Artioli, resulting in recruitment of specialized artisans.

He then undertook the production of small leather goods, handbags and luggage always at the factory in Tradate. In the seventies starts retail marketing with a multi-brand store in Tradate, three in Varese and a flagship in San Francisco.

Part of this activity is the wife of Vito Artioli, Maria Grazia Mascheroni, who is appointed procurer of the company.

In those years, Vito Artioli is stepping up its contribution to the public and social: he undertakes the town administration, helping to establish the Rotary Club of Tradate and, particularly since 1973 presides for over a decade, the Chamber of Commerce, Industry and Handicrafts Agriculture of Varese.

He presided over also the Italian Footwear Association of Italian Shoemakers of Confindustria and the European Footwear Confederation (CEC).

In 1985 the youngest of Vito two sons, Andrea Artioli, is sent by his father to the shop in San Francisco in order to introduce him later in the family business.

Andrea reveals a great preparation for the selling activity and on his return, obtains the diploma and an a higher diploma at Berkeley University of San Francisco. He starts working steadily for the company. In 1985 the company moves to its current headquarters in Via Oslavia n. 3 in Tradate. 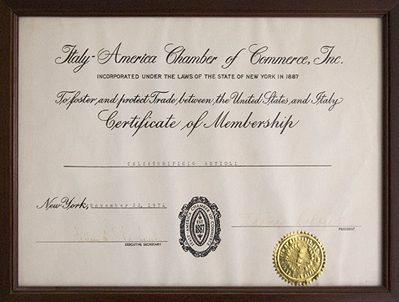